Posted on October 10, 2019 by cruisingwithcuttingclass

The Intracoastal Waterway starts at mile zero Norfolk, VA and goes all the way to Miami, Florida.  We do a lot of this inside route but hop outside when it’s too shallow including skipping Georgia by doing an overnight in the ocean to Fernandina, Florida.  The day we left for Norfolk was 93 degrees.  Decided to try the Norfolk Yacht Club which has reciprocity with our club in CT.  It was a gorgeous facility with a fitness center, 2 pools and an air conditioned lounge which we hung out reading in for the afternoon.  Would definitely go back there!  Proceeded the next day past all of our impressive military ships and entered the ICW.

There are two routes south in this section – the Dismal Swamp and the Virginia Cut.  Had a bad experience bumping deadhead logs in the swamp one year so have done the Cut every year since.  There’s a lock and three opening bridges that day ending at Coinjock Marina.

While leaving the next day, we heard a notice from the Coast Guard that the Alligator River Bridge was broken and would be closed indefinitely (this is a big swing bridge you have to go through)  We had to make a quick decision and thought it might be a bit windy but we’d try the Outer Banks route (we’ve done this a couple times but only in good conditions)  It was WAY rougher and windier than forecasted!  Blew in the mid 30’s the whole way to a fisherman’s harbor, Wanchese.  We were very happy to stop that day and waited another day to move on.  We have been out to Ocracoke from Wanchese but found out it got hammered by Dorian and were not allowing cruisers in.  Our only other choice was to go 77 miles, dawn to dusk to  Broad Creek anchorage, just north of Oriental, NC.  As our Brit friend Sue Torgersen used to say, “it was a lively sail!”  We ended up sailing with reefed sails more than half the trip going really fast, for us… 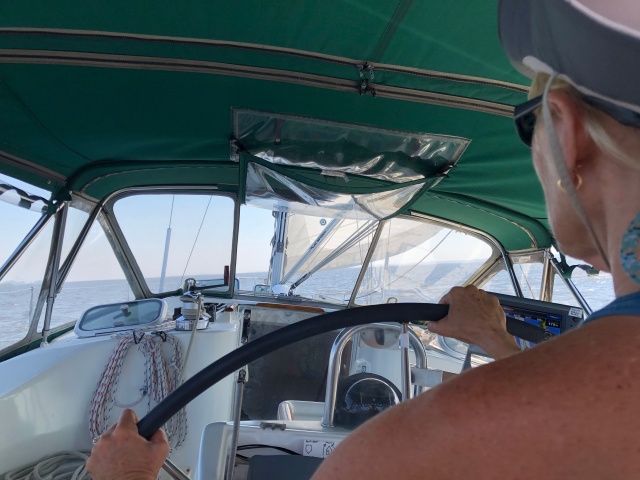 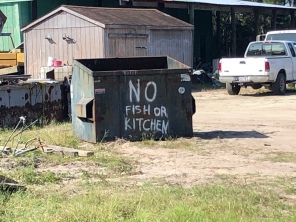 (Wanchese is a strange place😁.  BTW, Those two horses and two goats LIVE in the basement of that house and came out that door😮) 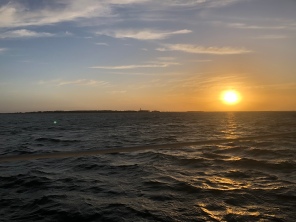 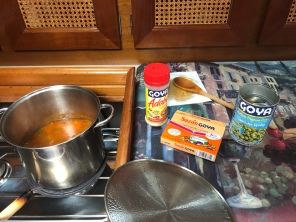 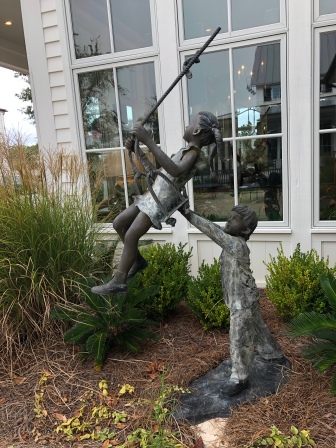 Spent a couple days at River Dunes Marina catching up, cooking and reading, allowing the winds to calm down.  Yesterday we moved south to Morehead City.  HOPEFULLY, the wind will calm and the seas will settle tomorrow and we’ll go offshore to Wrightsville Beach – another dawn to dusker.

BTW, tomorrow will be a week and that bridge still isn’t fixed!!  Lots of boats sitting and waiting⛵️

Taught for 30 years, now enjoying the cruising life from New England to the Bahamas!
View all posts by cruisingwithcuttingclass →
This entry was posted in Uncategorized. Bookmark the permalink.